As the 7th Legislative Council (LegCo) completed its first meeting on Wednesday after electoral reform ensured that only patriots can govern the Hong Kong Special Administrative Region (HKSAR), the chamber not only featured a new look that underscores the constitutional status of the city, but was also filled with a rational and constructive atmosphere.

The new electoral system is bringing local governance onto the correct track and ending the personal attacks and filibustering tactics commonly used by previous radical opposition lawmakers, while some lawmakers told the Global Times that it has turned a new page for Hong Kong’s political life toward good democracy.

Western media outlets and observers slandered the electoral reform saying that the patriot-only principle ensures only lawmakers who are in favor of the HKSAR government can be elected, and that without opposition lawmakers, the LegCo would be turned into a so-called rubber stamp body, the first meeting defied those claims. Carrie Lam, chief executive of the HKSAR government,responded to 17 questions from the lawmakers, some sharp, for example, questioning the government’s policies on issues like anti-COVID-19 measures and the economic recovery plan.

The first meeting was held with the Chinese national emblem hanging above Hong Kong’s bauhinia insignia in the main chamber, a new display of national symbol underscoring the constitutional status of the HKSAR as one of China’s regions. The new display also reflects that “one country” always goes before “two systems,” serving as a reminder for all the 90 lawmakers that they should not only focus on the local affairs in Hong Kong but also on the overall national interest, which Lam said was “a milestone” for the local political system.

Lam delivered a speech at the Wednesday meeting and responded to questions raised by lawmakers concerning legal and regulation amendments and policy advice. The meeting was extended for about half an hour, as the chief executive took the chance to answer as many as questions as possible. Such patience, in the eyes of some lawmakers, also indicates a good start for the administration and legislature to cooperate and check and balance with each other in the future.

As radical opposition lawmakers left the LegCo, the year 2021 was a fruitful year. The HKSAR government will propose 40 bills to the LegCo and the government expects enhanced cooperation with lawmakers, Lam said in the opening remarks.

The new LegCo is composed of lawmakers from various backgrounds, which shows broad representation and high political inclusiveness, Lam said, noting that she hopes to cooperate with LegCo sincerely to make achievements to win social recognition and demonstrate the advantages of the new election system, laying a good base for the healthy development of democracy.

Kennedy Wong Ying-ho, a LegCo member who was reelected this year, told the Global Times that the Wednesday meeting indicates that the culture of the Hong Kong LegCo has changed a lot and it is the beginning of high-quality democracy for Hong Kong.

The meeting was scheduled to last one and a half hours originally, but due to lawmakers’ active questioning, Lam prolonged it by half an hour, which demonstrates a good start for cooperation between the HKSAR government and the LegCo, he said.

“There was no meaningless abuse. Previously, some radical opposition lawmakers would use very insulting words to please their supporters and catch attention. They just opposed the government for the sake of opposing,” Wong said.

At the meeting, Lam unveiled the government’s restructuring plans by expanding the current 13 government bureaus to 15 with suggestions to add a Culture, Sports and Tourism Bureau, and splitting the Transport and Housing Bureau.

When asked by LegCo member Regina Ip Lau Suk-yee about the schedule of Article 23, Lam said that it is a responsibility of the HKSAR constitutional system and cannot be delayed any longer. She said that Secretary for Security Chris Tang Ping-keung is devoted to the related work.

Lam said a previous schedule they discussed previously is to start consulting within the term of the current regional government. But if lawmakers would like to discuss and finish the legislation within this regional government’s term, the government has no reason to deny that.

But the legislation has to be done well to ensure it is effective, Lam stressed.

Other policy proposals target the further integration of Hong Kong into the Greater Bay Area, a development focus for the city’s future which also aligns with the country’s growth. At the meeting, Lam described the progress on several major projects as part of the Northern Metropolis Development Strategy, and said that she would go to Shenzhen later to talk with Shenzhen officials on the three cross-border railway projects.

In July 2017, four lawmakers, Leung Kwok-hung (nicknamed Long Hair), Edward Yiu, Nathan Law and Lau Siu-lai, were disqualified by the Court of First Instance as they protested during their swearing-in ceremonies in October 2016.

Leung reportedly had been making trouble with Lam and former Chief Executive Donald Tsang during LegCo meetings many times. For example, Leung interrupted and shouted at Lam during the LegCo meeting in July 2017, leading to Leung’s expulsion from the chamber.

Such a smooth process of the first meeting of the 7th LegCo is also within the expectation of some senior policy advisors, as a new culture of local governance has been forming. “Lawmakers now focus on concrete local issues such as the anti-COVID-19 fight and economic and social livelihoods, unlike opposition lawmakers who interfered in meetings by making chaos, also, they were all suitably dressed,” Lau Siu-kai, deputy head of the Chinese Association of Hong Kong & Macao Studies, told the Global Times on Wednesday.

“A rational administration-oriented political culture is in the process of forming,” Lau said.

For a better future

Tang Fei, vice-chairman of the Hong Kong Federation of Education Workers and LegCo lawmaker who attended the first meeting, told the Global Times on Wednesday that Lam’s speech at the meeting was very detailed, including how many laws would be revised, how much expenditure needed to be approved and what aspects of systems and procedures needed to be simplified, which is even more detailed than the policy address.

The lawmakers at the Wednesday meeting were all well prepared and Lam was familiar with all the topics she was questioned over, such as tourism, industry and employment. As a whole, the atmosphere was very good for LegCo to play a role in the government’s policy implementation. There were some sharp interactions but these were targeted at topics rather than people.

Lawmakers are also dressed more formally and solemnly, according to the Wednesday meeting attendees.

Some foreign media had smeared that without lawmakers from radical opposition groups, the Hong Kong LegCo would turn into a “rubber stamp” body. Lawmakers reached by the Global Times refuted this opinion, noting that this meeting was more focused on rational and practical debate rather than personal attacks and smearing as had been the case with radical opposition lawmakers at previous LegCo meetings.

“Some of the questions were pretty sharp, but these sharp questions don’t end up as pure personal attacks. For example, we can discuss when some lawmakers questioned whether the government should apologize as it had not done very well in combating the epidemic, but there would not be any personal attacks or smearing,” Tang said.

At the meeting, a lawmaker said that Hong Kong’s anti-epidemic policies are “full of loopholes.” In response, Lam said that it is difficult for her to accept such an accusation, saying that it is unfair to say so given tens of thousands of people participate in the anti-epidemic work. 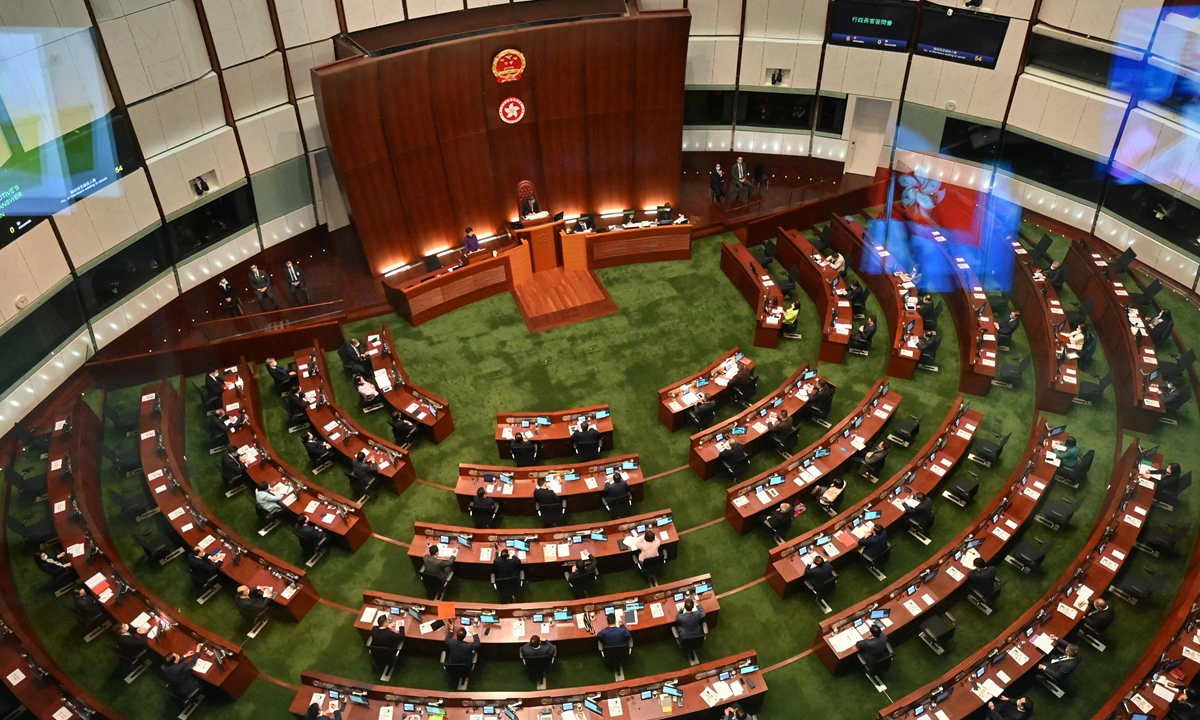